First off, all revisions on Project 2 have been turned in to The Agent, and he says he will "move ahead with it next week". Pardon me while I freak out.

In other notes, this is going to be a linkage post, mostly just to give more info on things on my brain.

First off, when I grow up, I want to join the League of Reluctant Adults. For starters, one of the members is Stacia Kane, my agent-buddy and authoress extraordinaire. And for second...ers... (Hmm...) There are a ton of other super great authors there, and I'd be giddy to count myself among them.

And speaking of Stacia, she is going to be a guest at Dragon*Con this year. And this is also something I would like to do someday. (We'll ignore for the moment that THAT many strangers, in a totally unfamiliar place, would probably have me gibbering or catatonic in a corner. I'm allowed to dream!)

Also, after a long, long (LONG) delay, I am going to be adding the link to my sidebar for my writerly friends. So check them out too! Some of them (like Cindy Pon) have books coming out soon, some of them are still in the process like me, but they are all really awesome and talented people.

So much going on

My head is swimming.

I've had one more back-n-forth with The Agent on more last second tweaks. I think I got it all figured out and sent back today. (he said it was fine before I did this last bit, but I really wanted to try and make it perfect) I hope the next e-mail I get from him is saying that he's sending it out to publishers.

The dudes from the water company were here today, and they painted more marks on the street. I'm assuming this means that they really are going to dig it up and fix the year-long water leak. PLEASE let them fix the water leak. I'm so sick of ice and water, I'm ready to move to Arizona.

We also have a man from the city coming on Saturday to look at our damaged foundation/driveway/garage door (again). I just want it fixed. That's all I want.

My revisions on Project 3 have stalled a bit, and I've been toying with Son of Project 2 at least in outline form. I'm still not pleased with my potential plot. (I've come up with some REALLY great stuff for book 3 in the series, though. Nothing like getting ahead of myself.)

I think I shall take the rest of this week/weekend off (yay Superbowl!) then get back to doing SOMEthing on Monday, be it revisions or outlining sequels.

After some hurried discussion with hubby, Chie and Gita on Saturday, I sat down yesterday and banged out the requested last-minute tweaks to Project 2 and got those shipped back to The Agent. Guess that means we're going on submission soon? I'll keep you posted. 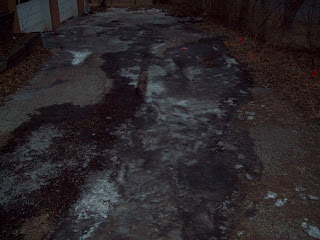 Why no, this is not the newest ice skating rink in town, this is my freaking DRIVEWAY! (and yes, it's looked like this mostly since October) Seriously, water department. It's been a year, and my hubby would really like to be able to park in his garage again. Where's the love? Yes, this is all from the water-leak-that-isn't-a-water-leak-but-now-is-a-water-leak-again. 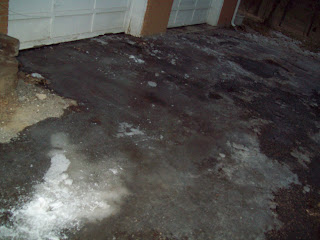 And you see the pile of jagged ice chunks at the end of the drive? Yeah, that's yesterday's ice that we diligently broke up and scooped out of the drive, only to be replaced with today's ice. 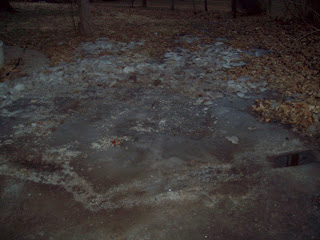 It's been a long, exhausting week, and I got very little done in the way of writing. Sometimes, the events of the real life just zap you that hard.

I also just got an e-mail from The Agent on a few more tweaks he wants me to do, and then he says "We'll be ready to go." Part of me still boggles at the fact that someone else might want to read one of my little stories. Hopefully, lots of someones.

I still have the plan to add another section to my sidebar for my writerly friends, but I've honestly been too drained this week to do it. This weekend, hopefully. As I stay inside, huddling out of the nasty nasty cold. (and watching the driveway freeze over again)
Posted by K.A. Stewart at 7:22 PM 1 comment:

Changed my mind, wanna come down

Bonus points to anyone who can ID that quote. (hint: It's from a cartoon)

So, after several frustrating hours yesterday where I stared at Project NaNo, knowing what was wrong with it but unable to figure out HOW to fix it, I decided to open up Project 3 a little and read. I mean, I hadn't even looked at it since the beginning of October, so it had time to ferment, etc.

And you know what I discovered? It's not that bad! Not nearly as bad as I remember it being.

So, today I started revising Project 3. Most of what I'm doing for this round is cosmetic (changing some terminoloy/caps lock/italics decisions), and adding in some details that I thought would flesh out the world a bit more. I am planning on it taking me two weeks, then I'm going to ship this puppy off to betas and see what they think. (They're probably going to think that I'm very very strange)

And to my very great delight, somehow in the process of revising chapter 1, my antagonist has increased in creepiness. Like, creepiness x5 instead of x2.

My other project to work on tonight is to add another link bar to the left side, linking to all my writer friends from AW and beyond. Stay tuned!
Posted by K.A. Stewart at 5:35 PM 2 comments:

You know who this is for: 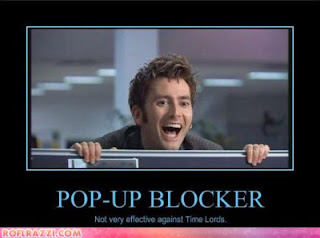 And one more, for giggles: 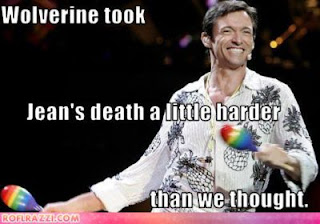 Finally! The first draft of Project NaNo is in the bag, folks. I feel drained, but happy.

Of course, I still have a butt-load of revisions to do on it now, before I even think of sending it out to the Beta Crew. The betas should consider themselves warned, however. I want to revise this one in about a month, and get it out into the world for feedback.

Once I do that, I'll be returning to Project 3 to begin revisions there. Barring, of course, any new developments with Project 2. Still waiting to see what The Agent thinks of my last round of revisions there. I hope we'll be out on submission soon.

Today was officially cold enough that it hurt to breathe, and Thursday is supposed to be colder. I think I'm going to spend the evening curled up here with kiddo, watching American Idol and thinking warm thoughts.
Posted by K.A. Stewart at 5:07 PM 1 comment:

Just as I feared, I had an e-mail from The Agent waiting behind the impenetrable server wall. However, as the Intrepid Auggy is enjoying rubbing in my face at the moment, it was not an error with the server, but an error with my router that was to blame.

Ah well, router has been soundly thrashed, and we go on.

The Agent just e-mailed to say that he'd be looking over my last round of revisions soon, and give me a brief overview of how he's going to handle submitting this to publishers. Whereupon I was struck with a very great terror (ok, we're watching Cyrano de Bergerac, so the language is getting a bit purple) when I realized that my "in the future" submission to publishers is nearly RIGHT FREAKING NOW! I'm not ready for this!

What if they don't like it? What if it doesn't sell? What if they post me on the Interwebz as an example of what NOT to do? What if The Agent finally realizes that he made a horrible, terrible, very bad mistake?

And of course, in the meantime, the reemergence of the Quarterly Project From Hell is sapping my will to do all things creative. Bleh.

Nevertheless, I shall soldier on! Or something.

I figured I was going to have to take weapons of mass destruction and storm somebody's office over this mess.

But when I get home tonight, I see that someone has been here, spraying the location of all the underground power lines, etc. along the street/driveway/yard where the water is leaking. Is it possible that someone is going to deal with it? Dare I hope?

Also, my friend Cindy is having a contest to give away ARCs of her upcoming YA fantasy Silver Phoenix. So please, head on over to her blog and fess up to your favorite kind of Chinese food! Also, surf around her website and check out her gorgeous artwork.

And on a similar note, my other friend Kim is also giving away an ARC of HER upcoming book, The Unbreakable Child. Visit her blog and reveal your favorite comfort food.

And wow, that may be the most links I've ever put in one post.

Still trying to finish Project NaNo. I am about 1/3-ish into the final chapter, and I figure even if I'm just puttering along, I should finish it by next week. I'm anxious to get it finished, I want to do some basic revisions, then get it out to my betas.

Waiting to hear back from The Agent on the revisions I sent him. This effort may be hampered by the fact that my "professional" e-mail address seems to have borked itself. I'm waiting for word from the Intrepid Auggy on what has happened and when/if it can be fixed.
Posted by K.A. Stewart at 5:49 PM 2 comments:

The Year in Review

It started with the Great Flood, repercussions of which are still trickling down my driveway and freezing solid. (I busted both knees on Christmas Eve, and they're still a lovely shade of purple)

I sent out my first query letter, got my first partial request, and my first partial rejection, all within four days. An auspicious beginning, to be sure. I wrote two books (if you count the NaNo project which is one chapter from completion). I revised Project 2 umpteen billion times. I got an agent.

Kiddo started school, and karate classes. She lost her first tooth at Thanksgiving, and proved that she'd rather wear red velvet dresses than ripped up blue jeans. (Are we sure this is my child?)

Hubby spent about two months this summer without gainful employment, which seriously tapped our resources. He also proved that he DOES know the meaning of budget, and cutting spending.

We got Gita to move within spitting distance, resulting in the most social activity for me possibly EVER. Chie visited, with spectacular results.

The year ended with a bang, literally, and our chimney in our front yard. But insurance is paying for it, and we've discovered that our neighbors might be decent people after all, even if we have no idea who they are after six years.

My writing hopes for 2009:
*Revise Project NaNo. Revise Project 3. Get both out to beta readers, and into some semblance of presentable shape.
*If I have time after that, I want to outline Son of Project 2, and get the sequel underway.
*I hope The Agent sells Project 2, with or without any siblings attached. I hope he likes the other projects, when I send them to him.

Thanks to all of you who stick with me from day to neurotic day. Let's see where the next year takes us.
Posted by K.A. Stewart at 5:08 PM 1 comment: