Who is The Music Box Girl? 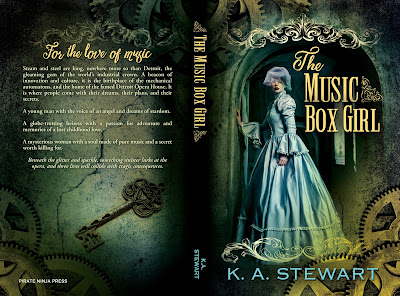 BOOK REVIEWERS!  I will be ordering proof copies of The Music Box Girl within the next few days.  If you want me to reserve you a print copy, email me at kari (dot) stewart21 (at) gmail (dot) com.  If you’d rather have an ebook copy, I can make that happen too, just let me know what format you want it in.  (sorry, folk, I can't just hand out books to everyone who asks.  You need to have an actual book review site before I can give up my proof copies)

The print copy will be released approximately a week prior to the ebook release (which is April 26th), so that everyone can be reading it on release day!

So You Want to Be a Writer!

I had an aspiring young writer email me with a few questions the other day, and after I got done answering him, it occurred to me that the questions were really good, and that others might find the answers interesting. So here they are, posted for your perusal, with his permission.

I'm wanting to be a writer, and I have some questions. How did college help you become a writer? When did you know you wanted to be a writer? What did you do early on that helped you? Is there any specific advice you have for me? What are some benefits and drawbacks to being a writer?

You’ve asked some really great questions, but I’m going to kind of answer them out of order.

First off, a lot of my earliest memories were of wanting to be a writer. When I was really young, I’d write stories set in my favorite worlds (books or comic books that other people had written). That’s called fan fiction now, but I didn’t know the word back then. I just knew I was having fun. I didn’t really start trying to create my own worlds until I was probably your age (12-13), and trust me when I say that those were really REALLY bad. But I got better.

However, that doesn’t mean that everyone that writes is a writer from day one. I have several friends who didn’t start trying to write/publish books until they were in their 50s. (and they’re doing quite well, actually)

When I got to college, I chose to major in English with an emphasis in Literature (instead of an emphasis in Writing). I did that on purpose, because it helped me learn HOW to read. It taught me about story structure, and literary devices. I learned about voice and style, and I learned all the rules and when/how to best break them. There’s a lot more that goes into telling a story than just the words you use.

The best thing you can do as writer is read. Read everything, in many different genres and many different styles. Make mental notes about the things that other writers do that you like, and don’t like. Note the things that you think they did well, the parts of the book that made you gasp or tear up, and note which things made you want to throw the book across the room. Think about, if I had been the one to have this idea, how would I have done it better, or different?

The benefits of being a writer vary according to what you want to get out of it. If you want to make a lot of money, being a writer might not be the best course of action. There are exceptions of course (Stephenie Meyer, J.K. Rowling), but most of us don’t make a huge amount of money. If you just enjoy exploring different worlds and sharing those with other people, then it’s totally the thing for you. Some people write, just because they like writing, and they never have any intention of showing it to other people. Some people like writing and letting other people read, but they don’t care about money, so they just post their work online for free. And of course, there are people who write solely with an eye toward publication. There are many different roads to Oz, and only you can decide what Oz is for you.

I know that even if I never published another book in my life, I would still write. There are people and worlds in my head that need out, ‘cause it gets crowded up there.

But really, one of the biggest benefits of writing is that you will be a better writer. That will be obvious in any job you ever try to have in the future. Being able to express yourself well in written format is starting to be a rather rare skill, and employers notice. (and trust me, even if you want to write as a career, you will need a “real job” too. At least in the beginning)

Being a writer also teaches you about follow-through and commitment. I’ve heard a lot of people who say they are writers, but they’ve been working on the same project for like ten years and never actually finish it. You have to finish stuff. You have to slog through the hard parts, whizz through the easy parts, and find an ending. Even if you never touch it again after that moment, just finishing something is an accomplishment.

One of the drawbacks of being a writer is that you live in your own head a good deal of the time. It can be a little lonely and frustrating when you know that not everyone around you “gets” that your brain isn’t always in this world all the time. The trick is finding a group of like-minded people who you can share your work with, and who understand the same struggles you’re going through. It doesn’t even have to be people that you know in real life. I have a great group of writing friends that I met online years and years ago, and even though we all write very different things and are at different places in our careers, we’re all still really close and are always cheering each other on. ((Caveat: Don’t talk to people online without your parents’ permission. They’d kill me. ;) ))

1) We have a saying in my writing group: “I am allowed to write utter poo.” The first thing you put down on paper is NEVER going to be perfect. It’s actually probably going to be pretty bad. And I say that about every writer ever, no matter how long they’ve been writing. But the great thing about having it on paper is that it’s THERE, and you can always edit. The only thing you can’t edit is a blank page. Editing is one of my favorite parts of the writing process, because I get to go back through and polish it up to be as awesome as it is in my brain. Sometimes, when I’m writing the first draft, I have to rush to get it down so fast that it’s not exactly right yet, but I know as long as it’s there, I can always go back and make it better.

2) Grow a thick skin. If you want to put your writing out for other people to see, you have to be able to take criticism. Now, there are people who will read your stuff and just be mean because they’re jerks. And those people you can cheerfully ignore. But for the most part, especially if you can find other writers to communicate with, they’re just trying to help you make things better. And also realize that not everybody likes everything. It doesn’t mean that you’re a bad writer, it just means you didn’t click with that particular reader.

3) The two most useful questions you will ever ask yourself as a writer are “Why?” and “What if?” Every story I have ever written has started with a “what if” kind of question. That’s where ideas come from. You start with what if. “What if fire fighters had super powers?” Then you flesh it out with “Why?” Why would firefighters NEED super powers? What happened in this world that makes it a necessity? How did the world get that way? What other effects would it have? And suddenly, you’ve built an entirely new world with its own people and rules and you’re writing a story.


I hope you all find these questions as interesting as I did. I actually had a good time really thinking about the responses.
Posted by K.A. Stewart at 9:49 AM No comments: