I was seven years old (almost 8!) when The Terminator came out in 1984.  I don’t remember a lot of the marketing around it, but I have a vague recollection that I thought it was some kind of horror flick, which put it solidly on the “mom won’t let me see it” list.  And given that it was rated R, at seven, she was probably right.

However, I was about fourteen when T2 came out.  Now, kids talk, so I had a general idea what the original movie was about.  I could even quote a few of the lines that had made it into pop culture.  So I was all gung-ho about T2.  I think, by this point, my mother had given up on trying to protect my impressionable young mind.

I can’t remember if I saw T2 in the theater, or waited until it came out on VHS. (yeah, that dates me a bit)  I do remember being wowed by the special effects, and that my father loved them too.  Even now, when I watch it again (it’s one of my comfort movies), I always have to think that my dad loved it.

I also remember wanting to BE Sarah Connor.  Like I had wanted nothing before in my life.  She was strong.  She was decisive.  She was fiercely protective of her child.  She wasn’t scared of anything. There was no softness to her, no apologies, no hesitations.  She got the job DONE. 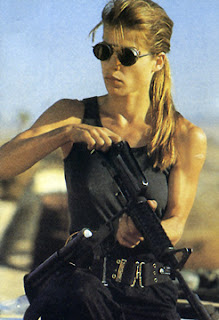 I wanted to be that, so very badly.  To have that much knowledge of the world, to be prepared for any situation that might come up.  To just not be scared.  I taught myself archery, herbal lore, field medicine.  Never could handle the noises guns make, so I skipped that part, but at one time I was wicked with a throwing knife and a hatchet.  I was ready for it, if the time ever came.  I didn’t know what IT was, but dammit, I was ready.

Later, as I grew up, I came to understand more of the subtleties of the character.  I mean really, no way around it, she was batshit crazy.  Sure, her delusions weren’t actually delusions, they were true, but that foreknowledge had taken a toll on her mind.  She struggled with day to day life, trying to connect the reality she lived in with the one that everyone else saw.

More than anything, I took away that she wasn’t perfect.  She made mistakes.  I found some comfort in the fact that she probably wasn’t going to win Mother of the Year, but she could probably come in a close runner-up.  She loved her son with everything she had, and she tried desperately to prepare him for the worst possible scenarios.  It was the only thing she (or anyone) could do.

I have tried to do the same with my own daughter.  No, not training her to lead the rebellion after a robot apocalypse (though, I bet she could).  Just to be prepared for whatever the world might throw at her.  I try to challenge her mind, asking her to think over questions and situations she may never actually have to confront.  I try to challenge her body, making sure she is strong and healthy and capable of taking care of herself.  I’m not training her to be a prophesied world leader, but her generation will someday have to run this world, and at least one of them should have a vague idea about what they’re doing.

I’m not sure if I ever became Sarah Connor.  Probably not.  I did let go of some of my more militant habits (if I try to throw a knife at you now, I'm more likely to injure myself than you).  Put on a few pounds more than she would probably have approved of.  But I like to think that she’d have agreed with how I’ve raised my child.  I guess only time will tell if I’ve done her justice.

On July 6, 2010, A Devil in the Details released.  Over the past few weeks, I've been contemplating what it means to be five years into my publishing adventure.

So where am I now?  I'm on my second agent, I have six books published (four traditional, two self).  I've written quite a few other books in the spaces in between.  Jotted down ideas for a LOT more than that.  I'm obviously not rich and drinking mai tais on a beach somewhere. (does anyone know what a mai tai actually is? I've never had one)  I've changed Real Jobs once, in the interim. My kiddo went from seven years old, to twelve. (a teenager soon, wtf?  Who allowed that?)  I went from seeing my ten-year anniversary with hubby, to my fifteen.

Not sure I'm where I wanted to be (see aforementioned beach and mai tais), but I also think that my wishes and expectations were based on a misconception of what this whole "being an author" thing is really like.  The journey I've been on so far is actually fairly typical, from what I've been given to understand in the time since.  Very, very few of us get the Big Sale and go on to Fame and Fortune and Movie Deals. I have to remind myself of that on the days when I've slipped down the hill into "why bother land".

In all honesty, I can't complain about where I am. My stories are in the hands of so many people that I don't even know.  People are living in my worlds, even if just for a little bit, and that's really all I could ever ask for.  I think about this a lot, especially as Jesse's story is slowly reaching its end.   Even though I know how the story ends (and a little bit about what happens after the big finale), I'll miss running around in Jesse's world.  I wonder if other people will do the same.  I wonder if they'll be willing to follow me into new worlds.  I have plans for the Arcane West world.  Caleb and Ernst are waiting patiently for me to get back to them.  I have plans for new worlds, amazing worlds.  I want to visit space, I want to adventure in dustbowl era Kansas.  I might revisit Elysia, sometime in the future, to check on Geoff and Lia.

I'm looking forward to writing another post like this in another five years.  They say (y'know, "they") that the ten-year mark is when an author really starts to have a career.  Not sure I believe it, but the only way to find out is to keep moving forward.

So I guess maybe what happened in the last five years is not so important as what might be coming in the next five.  Stick around, you'll probably be as surprised as I will.
Posted by K.A. Stewart at 10:29 AM 7 comments: