Star Wars: Retold (by someone who hasn't seen it) from Joe Nicolosi on Vimeo.
Posted by K.A. Stewart at 10:57 PM 1 comment:

The hazard of being in the "waiting" phase of the publishing saga is that I run out of things to talk about. I mean really, how often do you guys want to hear "Yup, nothing new today." ? Oh wait...that's what I do over at AW. Oops.

I did poke The Agent a couple days ago, just generally checking in. Right now, he says he's got Project 2 out at a couple places, and he's waiting for the layoff dust to settle at others. Makes sense. Like every other industry, publishing is going through some shaky times, and no one is quite sure who's doing what at the moment.

My own industry (the Real Job(tm) ) is one of the shaky ones too, but my boss-boss mentioned today that she's pretty sure we're not going anywhere in the near future. That's actually comforting to hear. I have this thing for stability. I really dig on it, especially when that's where my money comes from.

In writing news, I'm not setting any speed records this week. I'm piddling with Son of Project 2 here and there, but that mostly consists of revising and tweaking the one chapter I do have finished. You know, writing a sequel is actually harder than I thought. I mean, I have to work in a rehash of the first book & character relationships without being all info-dumpy, and yet include enough information to account for people who either didn't read the first one, or forgot the particulars. SO many things to think about!

My beta reports on Project 3 are still coming in, and so far, it seems to be fairly popular. (Two of my betas called each other long distance to squee over it. I boggle.) I'm waiting for the last few to come in before I start making revisions, but I'm looking forward to it a lot. I still think this may be the best thing I've ever written.
Posted by K.A. Stewart at 6:11 PM 4 comments:

...is way better than the outside of the cookie. This is the profound thought I had today while eating a snickerdoodle. Just thought I'd share.

So, the biggest news in my life is that, after one year, one week, and one day, they FINALLY fixed the water main leak in front of my house! (I forgot what color my driveway was when dry) Now we'll be able to get the foundation fixed and the driveway repaved (once warmer weather gets here, I assume. I wouldn't wanna be pouring asphalt in the freakin' cold)

Hubby and I got new pillows this weekend, and new chairs for our computer desks. These actually roll! Which of course means that one of them is going to move and drop me on my butt someday as I try to plant myself in it. Don't worry, I'm sure Hubby will be there to get it on film.

We also got new phones! Now, these aren't the uber pimp pilot-the-space-shuttle phones, but they're leaps and bounds ahead of our old ones. You can even listen to the radio on them! For some reason, I find this novelty extremly exciting.

I've been working on plotting the Son of Project 2 these past couple of weeks. Happily, I think I've managed to get a pretty solid plot worked up. I'm rather pleased with it. (my outlines are getting steadily better, with every new project. I deem this a good thing) I also have the first chapter written, but it's anyone's guess if this first chapter will actually wind up as the first chapter, or end up on the cutting room floor. Who knows, maybe someday I can do a "deleted scenes" thing on my web page (when I get a web page) ((And a book deal))

My only concern so far with SoP2 is that my current outline is 16 chapters. Project 2 comes in at 23 chapters. Now, I'm a firm believer that chapters are as long as they need to be, so putting 80K words into 16 chapters instead of 23 doesn't bother me. What concerns me is that for two books in a series to have such drastically different lengths to their chapters might be off-putting. I'm combing through the outline to see where additional chapter splits might be made, but I have a feeling that I won't know for sure until I start writing it.

And as a part of this discussion with the Purgatorians on AW, I found out that not everyone even writes in chapters! Who knew? Some folks just write, and when it's all done, they figure out where nice breaks would be. Just goes to show how different the process can be for people.

I'm still waiting to hear back from a few beta readers on Project 3 (which is fine, 'cause I told them to take a month, and we're way under that). I think I've identified a few consistent problem areas, and I'm anxious to see if they agree. If I'm right, then I think I already know how to fix said areas, and I'm kind of excited about it.

Ok, does me babbling like a loon make up for not posting more than once a week?
Posted by K.A. Stewart at 5:22 PM 4 comments:

Ok, I know that beta readers are supposed to read works for editing purposes, and be critical of...whatever they're critical of... And my betas will do that! But there is also a little part of me that just gets giddy when the initial response from one of them is just gushing squeee!

(that sounds kinda gross, actually. I need a better phrase there. I'll see what my betas have to say about it)

I mean sure, I want to make my work better, and I know it has places I could improve. But I still get a big charge out of enjoying others enjoying my work. It reminds me why I do this in the first place. I want other people to live the stories in my head and learn to love these characters too.

Three day weekend coming up, with a variety of events planned. Hubby is dragging me to see the new Friday the 13th movie. (I've never even seen the original) The theory being that, at age 32, it is way past time for me to see my first horror movie in the movie theater. An interesting way to spend the Valentines' weekend, no?
Posted by K.A. Stewart at 5:19 PM 5 comments:

That's right, I did it, I finished the second draft of Project 3. (pay no attention to the word counter on the left. That's what revisions are for)

For those poor people who have to spend more than ten minutes with me at any given time, they are either sick of hearing about it, or salivating in anticipation of reading it.

If you are one of the latter, and you have time in the next month to give it a detailed and thorough look-see, let me know.

I'm actually pretty proud of Project 3. It's totally and completely different from Project 2 and Project NaNo. At alternate times, I think it's the weirdest thing I've ever written, and maybe the best. (In my delusions of grandeur, this is the book that I envision people studying 50 years from now, trying to figure out just what I meant) ((Yes, I am that crazy)) This is also the first book (of mine) that has ever had a soundtrack, and that I can see being made into a movie.

Then again, the betas may all come back to me and say "WTF???"

Of course, I just realized that I'm not sure what I should work on next, while I wait for beta feedback. Son of Project 2? Second draft of Project NaNo? Hmm...
Posted by K.A. Stewart at 9:05 PM 3 comments:

I admit it. I'm addicted to Build-a-Bear. And honestly, there's only so many stuffed animals a grown woman needs. Even if I do have the excuse of kiddo to get me in the door.

However, hubby is an angel, and knowing this, he got me and kiddo both gift cards for Build-a-Bear for Valentines Day (early). (And I can't turn down a gift, can I?)

So, this is my newest creation and I'm so happy with it! I want to love it and kiss it and pet it and squeeze it and call it George. (only, it's a girl, and kiddo insists her name is Sierra) 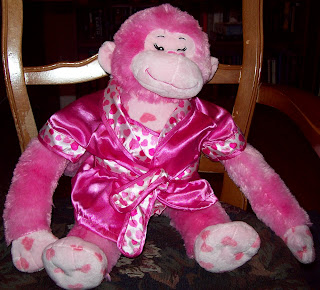