The Giant Gaping Hole in My Head


Yesterday was a momentous day for me.  First off, Peacemaker released, and if you haven’t downloaded it yet, why not?  You’re going to make Ernst cry. 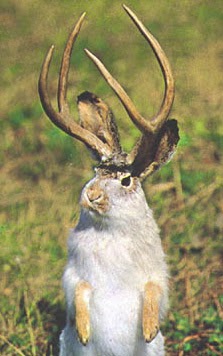 Why do you want to make the jackalope cry??  What kind of monster are you?

Second, I finally finished JJD4.  It’s not really a first draft. It’s more what I call an ugly draft.  I’ll mess with it for a few more days, and then I’ll probably send it out to my Beta Slaves this weekend.  (If this means you, brace yourselves, it’s incoming).  While they’ve got it, I’ll probably be pricing some editing services, as well as cover artists, to try and find some folk that I can work with (and can afford).  I’m desperately wanting to do this one without running a Kickstarter, so financial stuff has to be considered.  What this ultimately means is that we’re still a few months out from you, my awesome readers, being able to see it, but it’s closer!  It’s so much closer.  I’m still shooting for this summer, at some point.  I’ll keep you posted.

However, finishing a book always puts me in a weird mood for a few days, and I thought I’d blog about it. (As one does about such things.)  I actually wanted to do this post when I finished writing The Musicbox Girl, but couldn’t wrap my head around everything that I wanted to say before the feeling just faded away and I kinda lost what I’d wanted to do.  So, you get it now, hopefully while all my thinks are still freshly thunk.

Completing a novel feels great.  Heck, for me, completing a grocery list feels pretty damn life affirming.  Anyone who has ever tried to write anything knows that there is a satisfaction to coming up with a coherent beginning, middle and end, no matter if you’re writing a novel, a short story, or a dirty limerick.  (Love me some dirty limericks)  You have done SOMEthing.

But the part that gets to me, every single time, is this profound sense of loss I feel.  Suddenly, all of the scenes and lines and people that I’ve been living with in my head for months are gone.  You have no idea how long some of the things you read have been percolating in my gray matter (multiple years, in some cases).  And once it’s on paper, once it’s brought to life, it’s just…gone.  I have a giant, novel-shaped hole in my brain.

Part of me has to wonder if this is what it’ll feel like when kiddo grows up and moves out of the house.  You spend all this time, tending and nurturing something, and then suddenly it has a life of its own, and it doesn’t need you anymore.  Yeah, that’s the way it’s supposed to be, and you’re happy, but for at least a little bit, you’re also suddenly lonely.  There’s a genuine feeling of mourning.

Now, this giant gaping hole won’t last forever.  I think of it like a foot print in wet soil.  Slowly, the water seeps back in and fills up the emptiness.  Already, I can feel my plans and plots for my MBG revision seeping in there.  Soon, the hole in my brain will be taken up with that novel, and once I finish revising that, then another novel will seep its way in.  And another after that, and another, ad infinitum.  (Hopefully)

So the loneliness and loss don’t last very long, especially if I’ve got other projects loudly demanding attention.  But for just a few days, finishing a novel is a bittersweet victory.  So long, Jesse & Axel and the rest of you crazy kooks.  I’ll see you again in a few months.
Posted by K.A. Stewart at 6:31 PM 5 comments: