As The Year Turns 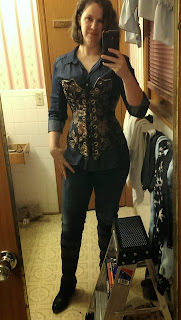 And what a year it's been.

I'm looking back on all my grand plans, trying to figure out if I should be disappointed in myself for not meeting all my goals, or satisfied with what I DID get done.

Suffice to say, I wanted to be done with Jesse #4 by now.  I'm not.  The last two months has been a total wash, though I will say that I think I've made a brainstorming breakthrough and I'll be starting back up with the writing again probably as soon as I finish this post.  I'm so very close, if I can just get over this little bump.  I know how it ends, I just have to get there.

I fully admit, my writing was a victim of stress in other areas of my life.  I know that I've mentioned my Real Job(tm) before.  Well, for the last....oh, probably two years, if I'm being honest...I've not been happy with the Real Job(tm).  In fact, I've been scrambling to get clear of there.  Sadly, I'm not in a position where writing full time is feasible, financially, so getting clear of one job requires a new job.  And in the industry where I work, that's easier said than done right now.

However, over the last three months, I managed to apply/interview/finally get hired at a new place!  I'm simultaneously thrilled and terrified.  I mean, I worked at my old job for eight and a half years.  It's been a while since I had to get all dressed up and go make new friends.  But it'll be fine.  It has to be.  At the very least, it can't be any worse. 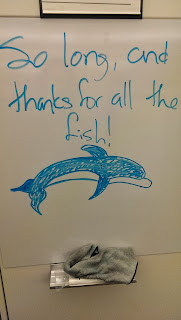 New Job schedule is slightly different (Old Job started at 7 a.m., New Job starts at 8:30 a.m.), but I think I'm going to parlay that into some early morning writing time.  I recall that when I was working on The Musicbox Girl, my Saturday mornings were very productive.  No one in the house is up, it's quiet, I'm not exhausted...  It sounds worth a try.

Also, I find it very poetic that the winter days were getting darker right up until I quit the Old Job, and now when I start the New Job, the days will be getting lighter.  Happy Solstice, everyone!

So.  Goals for the new year:

January - Finish JJD#4, get it out to betas.  I'm about 30K words from the end of a first draft.  Once the holidays are past, I'm going to buckle down and knock this thing out.

January 21st - Peacemaker release.  Advance reviews are trickling in so far, and people seem to like it!  This makes me happy.  It's a fun little story, not intended to change the world, and I hope people enjoy it.  I should probably come up with some promotion events centered around that, but honestly I'm a bit tapped out of ideas given the absence of actual physical copies.  So if anyone has a thing they want me to do, let me know!

February/March - I will be revising The Musicbox Girl per my Lovely Agent's advice.  Kinda looking forward to getting my hands back into this story.  I will also be hopefully assembling beta reader notes on JJD#4 and once MBG is done, go through the Jesse book again.

April - Find an editor & cover artist for JJD#4.  My actual release date for that book will depend on deadlines for these two things.  Starting to look like a summer release for the book, which is apt, since the first three always came out in summer.

Rest of the Year - I want to start outlining/drafting Arcane West #2 (a sequel to Peacemaker).  I also want to start working on a new project that has been driving me nuts called Valkyrie, Inc.  It'll be a little different than some of my other stuff, but it feels like it's going to be fun and I'm excited about it.

Hoping that I can get MBG into a shape where Lovely Agent will want to start subbing it.  She also has Muse to read, and I'm hoping to find out if she wants to try subbing that too, or if I'll be trying to self-pub that one.  Also hoping to make a decision on whether or not to self-pub Night of Fire and Ash, but if I did that, I'd officially have three series going at once, and that way lies madness.  So that one's going to take a bit of thinking.

And of course, once JJD#4 is done, I need to move on to #5.  There will be six Jesse books in the end, and I'm very devoted to finishing the series.  It's just something I need to do at this point.


As we've seen, my best laid plans often go awry, but I like having a starting point from which to veer off dramatically.

Happy Winter-Holiday-Event-of-Your-Choice, and may the New Year be fabulous for us all!
Posted by K.A. Stewart at 9:05 AM No comments: