Today, I had one of those moments where I wrote something that actually gave me goosebumps. I didn't mean to write it, I hadn't planned for it in my outline, but once it started happening I was swept along with it like my protagonist, and both he and I sat there with our hearts pounding until it was over.

It was a GOOD day.

The weekend went great, much fun was had on Halloween, and though Gita and I realized it had been thirteen years since either of us had been rollerskating, we handled ourselves admirably. Only one adult hit the floor, and it was NOT either of us. (or hubby, for that matter)

And since I know some of you were dying to see, here is a picture of me at work on Halloween, as a vampire. 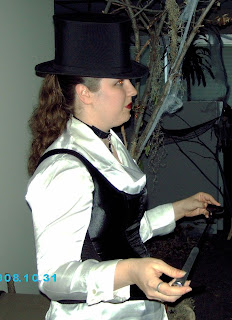 (I did change costumes later in the evening, but I don't have pictures of that one yet)
Posted by K.A. Stewart at 5:13 PM

I love the top hat.

You're a very scary vampire.

*smirk* You're scared of me when I'm NOT in costume.