Yesterday was the party for the release of A SHOT IN THE DARK (mostly because my friends need very little excuse to have a party). And as part of the party, we had a snarky T-shirt contest!

The winning T-shirt was this one:

If you can't quite read it, it says "Haikus are easy, but sometimes don't make much sense. Hippopotamus." It came from Cafepress if you desire one of your very own.

And while we had intended to have an adult division and a child division, we wound up with a distinct and unexpected lack of children at this party, so it turned into a second-place prize instead. Through absolutely NO intervention of my own (Hey,I didn't even vote for them) my beloved kiddo and hubby won a team prize for their zombie-themed shirts: 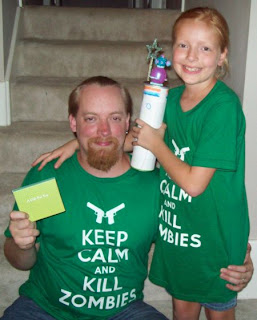 The crown on the entire party, though, was the cookie cake, which seems to have been vandalized by one red-eyed, rather snarky demon: 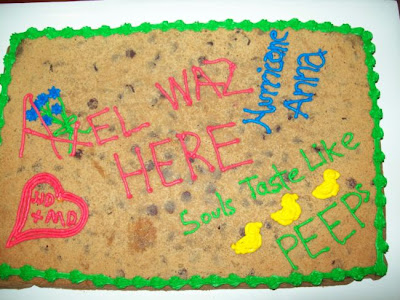