Yesterday, as I was working on my copy editing phase for Second Olympus, I Googled something involving the use of the possessive apostrophe on names ending in S. (I know, wild and crazy stuff, right?) The amusing thing was, the first hit that popped up was a thread on a writers’ forum from 2008. It was my thread, asking the same exact question for the same exact reason on the same exact book.

First off, let’s not talk about my powers of retention. Second, it made me realize that by the time Second Olympus actually releases, it will be 7 years old, and it will have a long road behind it already.

I started writing Second Olympus (then called Muse) back in 2008 after I’d finished the first JJD book (then called Third Strike, since we’re talking trivia). I was querying, trying to find an agent, and I knew I had to keep writing to get my mind off of it. A stray conversation late one night with a friend lead to the idea of Muse, and I got to work.

It was unlike anything I’d been writing, up to that point. I had a trunked epic fantasy under my belt, and JJD1 which was urban fantasy. Muse was…different, which was scary and exhilarating all at once. I stretched myself beyond my own literary box, and in the end, I was really proud of what I’d done. I think I finished it sometime in early 2009, about the same time we sold the JJD series.

Of course, from that point, I got busy with JJD stuff and new projects. Every so often, I’d go back to Muse and revise bits and pieces, send it to new readers, get their thoughts, add my own. My first agent wasn’t super gung-ho about it, I could tell, not because it was badly written, but because he just didn’t see a traditional market for it. And that’s their job, to know those things.

Time went on, years went by. I wound up with a new agent. When she asked about other projects I had, I of course sent her Muse, ‘cause I was still super proud of it. She had the same feelings about it, that traditional publishing probably wasn’t going to be interested. That was the point where I’d just had success getting JJD4 out on my own, and I knew that I could do this. So, with her permission, I moved forward with self-publishing Muse. That actual decision was made…probably July-ish, 2014? (Yes, looking at the date in the picture below, that was exactly when I made that decision)

I did another round of new beta readers, and their suggestions really made the book into what it is at this moment. I came up with a new title, and hopefully on March 24th, 2015, you will all get to read Second Olympus. (See what I did there? Slipped a release date right in like that. Ain’t I sneaky?)

I can’t even count how many rounds of revisions this thing went through. I probably have four different printed copies of this thing floating around my house, and at one point, I just quit printing it out and started making my editing notes on the same draft, just in different colors so I could tell the evolutions apart. 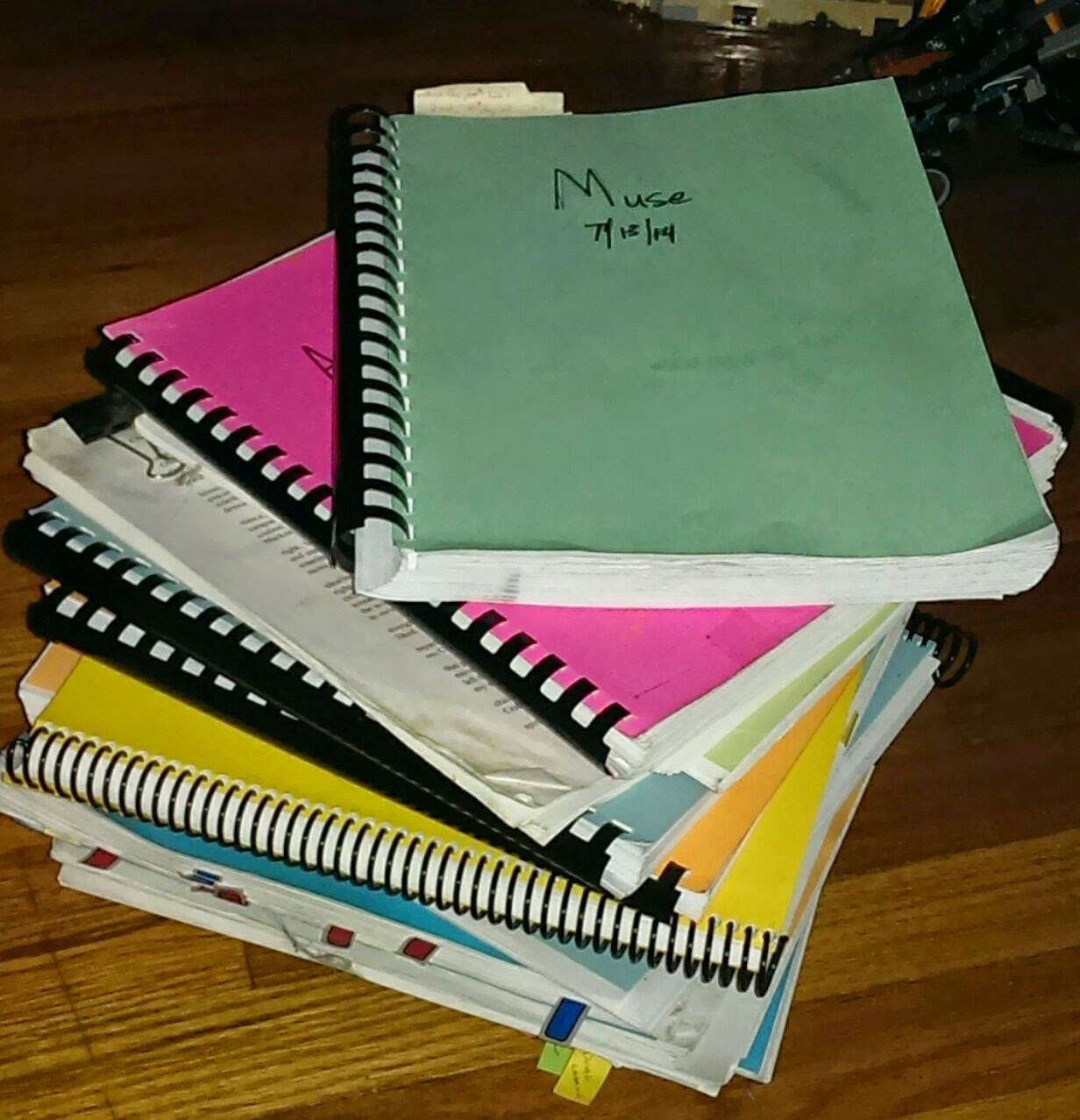 (This picture is the pile of previous drafts of everything. Muse, JJD1-JJD4, Peacemaker, MBG. I have no idea what to do with these. Do I throw them away?)

I should finish the copy edits this week on my lunch breaks, and then this weekend, I’ll get the print copy formatting done. Once I have a firm page count, I can commission the cover art and get this ball truly rolling.

My goal for release is March 24th, like I said above, contingent on cover art and zombie apocalypse, of course. I’ll try to get everything up for pre-order by March 1st if I can (the print copy won’t have a pre-order phase, but I’ll make it available a few days early, like I did with JJD4, so we can all read on the release date). I’ll also try to have limited print copies available for reviewers who want them, so folk definitely need to let me know. (kari.stewart21 (at) gmail.com)

I keep going through these deep highs and lows with this thing. The highs are where I’m SO FREAKIN’ EXCITED to have this book out and available. After all this time, it’s still one of my favorite stories. The lows are where I’m damn certain this is garbage, and that fans of my JJD books aren’t going to like something that’s so very different from what they’re used to from me.