I was a teenage Wolfrider

Y’know how sometimes, something just keeps popping up into your conversations. And it’s from all different sources, so it’s not like it’s all you, or that anyone planned it. Just one thing keeps reminding you of its existence, over and over and over. Persistent little bugger.

Well, that’s how ElfQuest has been for me, this past week. Seems like, no matter where I turn, someone is mentioning it. And it’s not even people I knew were fans! We’re wider spread than I ever imagined.

So today, we’re talking about ElfQuest! Now, the majority of you are probably thinking “What?” So lemme explain. No, there is too much. Lemme sum up.

Once upon a time, this husband and wife team (Wendy and Richard Pini) dreamed up this nifty little comic. It was about elves and wolves and trolls. They put it out in black and white, then in color, then in graphic novel form. There were anthologies, telling stories of all the chiefs who came before Cutter. (My personal favorite story from the second of that series was one called "Summer Tag" by Allen L. Wold. That book is long gone, sadly, but I remember it so well.) There have been spin offs, and RPGs 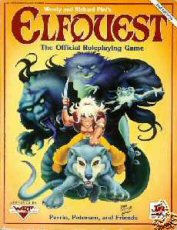 , and board games (which I have, never fear). There were pewter figurines to be painted. (Of which I have two sets. Unpainted) There has been talk of movies, of Saturday morning cartoons, and every time those fall by the wayside, we all felt a little sadder.

I was probably…oh…seven? Eight?...when I discovered EQ. I distinctly remember the day. I was out with my grandmother, in Woolworths (yes, my town still had one at that point) and on their little rotating comic rack, I spotted this cover with a pointy-eared blond fellow, on wolfback, apparently kidnapping this dark-skinned beauty and threatening another fellow with a sword. (This would be the "Raid at Sorrow's End" issue, for those who would recognize it) It looked so freakin' awesome!!! And because my grandmother spoiled me rotten, I got it. 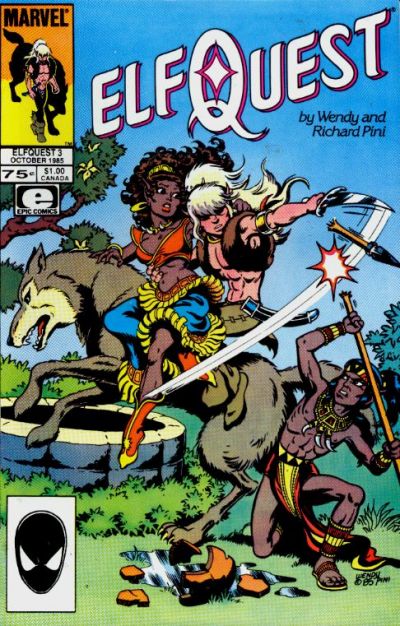 Did I mention that I was a really lonely kid? I mean, we didn't even have any neighbors with kids (within bike-riding distance) until I was in fourth grade. I had 50 acres of forest, and an overactive imagination. ElfQuest was PERFECT for me. I was a WOLFRIDER!

I can't tell you how many hours I spent running around in the woods, usually dressed in some bizarre homemade costumes, always armed with my very real skinning knife and bow. I built my own Holt. (sort of) I knew my own soulname. (oh come on, you did it too) To this day, I can recite the chief's lineage from Timmain, all the way down to Ember.

The Wolfriders shaped a good deal of my childhood, and even now I'm sure my friends would tell you that's where I got my very "pack-oriented" mentality. I can tell you which of my friends would belong to which tribes. (Hubby is a Go-Back, through and through. Best friend, probably one of the Sunfolk. Kiddo's a Wolfrider, like me)

Now,I have...well, pretty much every ElfQuest thing you could imagine, though not nearly all the things that were put out at its height. I hope to get my daughter into it, someday. But for those who don't have access to the comics/graphic novels (long out of print, I'm afraid), the Pinis have graciously put EVERY SINGLE ISSUE up online. For free. Seriously.

And now that I've lost the last hour in reading old EQ issues instead of hunting up pictures for this post like I was supposed to be... Oi. It's addictive.

Because of my exposure to ElfQuest, I've fanatically followed Wendy Pini's work. I have both of her Beauty & The Beast graphic novels (y'know, from the old TV show, yet another of my obsessions). I ate up every installment of her Masque of the Red Death (Not kid safe, folks). I'm not the only major fan. Recently, someone released a fan trailer, a live-action imagining of what a movie might look like. (I was pleased to note that I could name every character there, though not all of them existed at the same time in canon)

I have several fondest wishes revolving around my EQ love. First and foremost would be an EQ movie. Cartoon, live action, whatever, just don't screw it up. Second would be an online MMORPG based on EQ. GODS I would love to see that. And third, and it's one of my worst-kept secrets... One day, I would love to have Wendy Pini do the graphic novel of Muse. And since Muse is still on my list to rewrite, later this year, that one's truly a wish only. But it would freakin' ROCK. 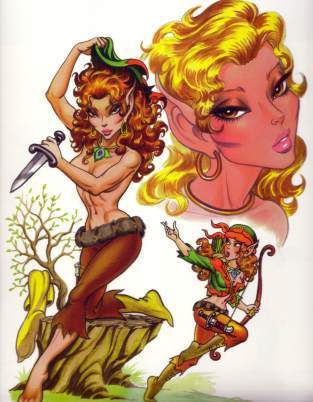 And since I know you're all wondering... Nightfall was my favorite. No magic, but fierce and loyal as hell.


But Strongbow was the hottest. 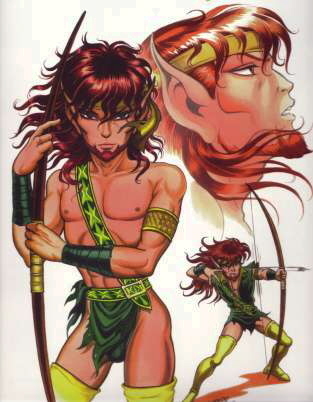