I've mentioned before (many, many times) that I have a severe zombie phobia. Nothing freaks me out quite so much as those undead, shambling, plague-spreaders. And whoever invented FAST zombies...well, there's a special form of torture waiting for you someday.

Of course, because I seem to be some kind of masochist, I feel compelled to at least attempt to watch and/or read every zombie thing I come across. Consider it therapy. Or just lunacy. But, in this drive to expose myself to all things zombie, I came to realize that not all zombies are created equal. Which got me to thinking, what exactly is it that scares me so badly?

I started my zombie odyssey many years ago when Hubby insisted that I should watch George Romero's original movies. We started with Night of the Living Dead, then moved on to Day of the Dead. I remember being unimpressed with the first movie, but the second apparently made more of a mark than I realized. It involved zombies being kept in underground caves, penned up, and the next time I had to go pick Hubby up at his job (then, in an underground cave system) I almost couldn't drive through the complex to get him.

That's when I knew. I was a zombie-phobe.

The next movie I saw wasn't a Romero original, it was the 2004 remake of Dawn of the Dead. First off, the very first zombie you see is a small child. And since I became a mother, I get squicked with little kids in peril sometimes. So that was strike number one. And second, the zombies were RUNNING! WTF??? How is that even fair? They want to eat you, they never get tired, and they can run forever??? I only made it about 2/3s of the way through the movie before I had to shut it off. The bleak hopelessness of being trapped in a shopping mall just...was too much.

At this point, I knew that zombie movies weren't my thing. Didn't keep me from watching the Resident Evil trilogy, or Land of the Dead. None of these movies bothered me as much as Dawn of the Dead, and I got through them easily. In retrospect, the Resident Evil movies didn't focus SOLELY on the zombies. There were other threats, other things to do, and most importantly, ways to escape. For Land of the Dead, the difference came in that the zombies suddenly started thinking. (well, ok, one started thinking but the others were all taking direction from him) Once they were no longer the mindless, unstoppable, plague-ridden flood, they weren't as scary to me.

Somewhere in all this, I also discovered zombie books! I prefer books to movies anyway, and I could stop and put the book in the freezer if I had to, to give myself some breathing room. So, I dove right in, and I discovered that like zombie movies, I had varying levels of discomfort. 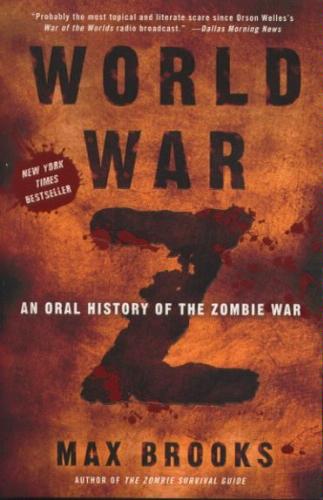 My first was World War Z. I thoroughly loved this book, and wasn't freaked out at all. I think, mostly, because this was told by the survivors after it was all over. I mean, I knew it had a happy ending! (ish) They had figured out ways to combat the zombie horde, and it was pretty much a done deal. I like this! I like dead (truly dead) zombies.

The next one I read was The Forest of Hands and Teeth. I read this one contrary to warnings from my dear friends who know me too well. Don't get me wrong, it was a GREAT book! But when it was over, I had to go through the house, turning on all the lights, and put the movie Crybaby in 'cause it was the most anti-zombie thing I could think of. This one wigged me out. The zombies were everywhere, had BEEN everywhere for decades apparently, and most horrifying THERE WAS NO ESCAPE! They were either outside the fences, so you were trapped, or they were INSIDE the fences, so you were trapped. They were relentless, and there was no way to destroy them all. Wigged me out, totally.

Next on the list was Boneshaker. LOVED this book, it had just the right amount of zombies! They weren't the total focus of the story, and even better, they were confined to a specific geographic area. The only complaint I had was that the zombies could suddenly climb ladders, and again, this seems inherently unfair. Give me my slow, stupid zombies, thank you very much! 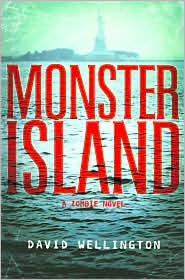 And the latest on my zombie reading list was Monster Island. It started out to be one of the "freak Kari out" kind of books, with the world devoured by the undead plague, and the mindless, shambling eating machines just waiting to chomp on you if you strayed. However, the author then introduced a thinking zombie, and even worse, one that could control the other zombies, and again, it suddenly removed all the fear for me. The non-thinking zombies became simply tools, and the thinking zombie...well, he was just another bad guy.

So, what did I learn? It seems that two things trigger my fear factor when it comes to zombies. First, the lack of escape. I find this same factor applies to movies set in space or deep ocean. (The Abyss only works for me, 'cause I know how it ends) I gotta have somewhere to run to folks, or I just can't handle it. Apparently, I don't do "cornered" well.

The second factor seems to be the mindlessness of the zombie. Once they can think, they're capable of mistakes, just like any other bad guy. Only the mindless ones, the eating machines that keep advancing no matter what, those freak me out because there IS. NO. STOPPING. THEM. They will bash themselves to bits on your defenses and the ones behind them will just step over the quivering pieces of corpse.

Even just thinking about that gives me the heebie jeebies.

Wonder if I can stick my blog in the freezer.
Posted by K.A. Stewart at 9:14 AM

The movie that scarred me for life? "The Last Man on Earth" with Vincent Price. It's been made and remade many times (it's the Richard Matheson "I am Legion" er or is it "I am Legend") but that particular version...ugh...

HAHAHAH!! Oh, this post made my day... I totally agree with you re: what makes zombies scary. Shambling, mindless and implacable. Fast ones piss me off. Although Dead Set (it's a brilliant British mini-series and on one hand, I recommend it highly because it's so damn good, but on the other hand, I think you'd hate me if you watched it) did fast zombies soooo very well...

And that's just me first thing in the morning.

That's you after a couple of drinks, too. *smirk*

I believe there are multiple schools of thought on the upcoming Zombie Apocalypse. I subscribe to "Preparedness."